We have another really full programme of events for you today.

Morning in the McCosh Hall

Drumming Workshop with Phyllis Fleming – if you’ve always had a hankering to discover your inner djembe or percussion player, now is your chance. Phyllis is a renowned music teacher and these drumming workshops are legendary!

Afternoon in the Kirk

This concert will feature the lovely sound of harpist Ruth Mackay. 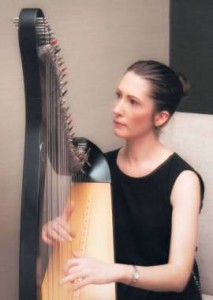 Ruth grew up in the Highlands and it was there that she was first introduced to the clarsach, or Scottish harp. She began learning to play while she was at school and has continued to enjoy playing since. She has two harps, a Starfish Glencoe which was made in Ballachuilish, near Fort William and a Salvi Donegal which was made in Italy. Having studied in Glasgow and travelled all over the world, she returned to Glasgow to study for a Diploma in Music Education at the Royal Conservatoire of Scotland and is currently studying for a BA in Scottish Music.

Her repertoire is wide and varied ranging from traditional tunes to contemporary songs. Ruth is also a singer, bagpipes, piano and guitar player! Over the years, she has performed at numerous music festivals, concerts, weddings and functions the length and breadth of Scotland. Check her out at: www.ruthmackay.co.uk

There will be another of Kirkmichael’s legendary afternoon teas following the concert.

Afternoon at the McCosh Hall

If your taste is for something a little louder and you want to see where the next generation of Scottish bands is coming from, we will be hosting the final of The Battle of the Bands in the McCosh Hall. This is a unique opportunity for young bands, aged between 16 and 24 to really advance their careers. The prize is extraordinary – the winning band will be given their own slot playing live on a new music programme on STV!

Details of how to enter the competition can be found here.

but essentially, to enter you must be:

To enter please submit one MP3 file of your band performing a song via email to battle_of_the_bands.kmf@outlook.com The quality of the recording will not affect your chances of making it through – we understand that not everyone has access to the same quality of recording facilities – we are looking for talent. The entries will be judged by our panel, and the finalists will be invited to compete for the star prize on the afternoon of Sunday 15th June at the Kirkmichael Village Music Festival. NB All acts who compete in the final will be expected to share a drum kit due to time constraints.

Final Deadline: ALL MP3 ENTRIES MUST BE EMAILED TO battle_of_the_bands.kmf@outlook.com BY FRIDAY 23rd MAY.

This really important concert will consist of the five finalists chosen by a panel of judges. It will be compeered by the inimitable Carol Davies and entry to this one will be free!

Evening at the McCosh Hall

So, Sunday night is party night! It’s an earlier finish to comply with licencing regs but it’s a quality concert nonetheless.

First up are the exciting Glasgow-based duo Watermelon Moon 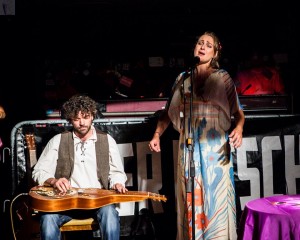 Consisting of Wendy Rae on vocals and Enrico Francese on guitar, this highly original duo is really making waves in the acoustic music community. Wendy’s voice ranges from the pure and sweet to out and out bluesy while Enrico’s virtuousic guitar playing varies from the almost painfully sensitive to out and out flamboyant (and all shades in between). Their appearance on the Danny Kyle stage at Celtic Connections 2014 was very well received and the couple is now performing all over the UK. They will be coming to us fresh from the How the Light Gets In Festival in Hay on Wye. Phenomenal stuff. 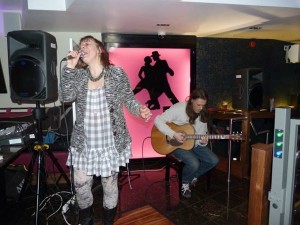 Fine guitar maker Mark Bailey (www.baileyguitars.co.uk) finished his first acoustic guitar here in Scotland, live at the Kirkmichael International Guitar Festival in 2003 and it was that unique acoustic musical experience that inspired him to do two things – to move to South Ayrshire with partner Carol Davies and to start making jazz archtops. Eleven years later, not only is Bailey Guitars going from strength to strength making a wide range of custom built electric and acoustic guitars (and other stringed instruments) and offering guitar-building and customizing courses.

Musically too, England’s loss has definitely been Ayrshire’s gain. The couple wasn’t long in establishing themselves as central to Ayrshire’s vibrant music scene. Hugely talented in their own right, the duo perform their own, highly original cover versions of a vast range of musical styles and genres as well as their own beautifully crafted material and appear regularly all over the county and beyond. In addition, they are well known for their open mike Acoustic Bliss nights, their fostering of new talent and their work with other musicians.

You never know quite what to expect from a concert with Mark and Carol but you can always be sure of two things – it will always be great and it will never, ever be boring. Expect the unexpected and expect to hear a really great set! 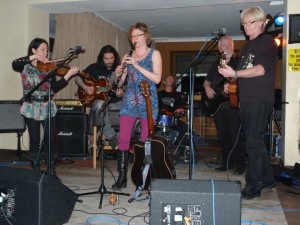 John Duffy says his earliest memory is of tearing at the rotted brown cloth of the back of an upright piano and playing in the dust while his father played the honky tonk train blues. As he grew older and big enough to sit in a chair unsupported, he would watch the hands of the guitarist playing chords and complicated solo runs up and down the fret board. He says he didn’t need to know the names of those chords as he could tell simply by listening whether they were the right ones or not. Now there’s a musical brain! Fast forward a couple (ahem) of decades of music-making which has been as wide-ranging and varied as it has been accomplished (and that’s saying something) and we have the fabulous Gypsy Jazz Band with its current line-up of John Duffy (bouzouki/vocal), Laura Hyslop (clarinet/vocal), Luther Sean Hall (double bass fiddle), Emanuele Pasquino (electric guitars/cigar box guitar), Hugh Clinton (acoustic guitars/mandolin) and Richard Hamilton (percussion). The band also features special guests Francesca Masucci (violin) and Steve McCann (bass guitar) – a bunch of eclectic musicians playing eclectic instruments and creating the most amazing gypsy jazz vibe. The band’s album A Waltz in the Darkness is now available in CD and to download and features four of John’s own compositions plus a lyric he wrote to accompany Reinhardt and Grappelli’s well known Django (Minor Swing).

This is going to be an evening not to be missed at any cost!